To improve the reliability of your responses, complete both cultural worldview tests before reading further sections of this article. Following the completion of the surveys, your results for both scales will be indicated in bold on the “Thank You!” page.

The above online surveys will be live only until 20.04.2016. If you still wish to determine your cultural worldview after this date, you will have to be do so manually via this file. These survey instruments were designed by Kahan et al. (2007), as part of the Cultural Cognition Project at Yale.

Since the 1970’s, academics have sought out explanations for why individuals perceive certain aspects of society as risky or not. For instance, personality theory claims that certain personality traits make individuals risk takers or risk averse, economic theory proposes that those who have wealth have lower perceptions of risk due to their ability to afford losses, and political theory suggests that demographic characteristics and access to power have a great influence on how individuals perceive certain risks (Wildavsky and Dake, 1990: 42-43). However, for the purpose of this article, cultural theory is of most relevance. Initially advanced by the anthropologist Mary Douglas (1970; 1978), the theory claims that there are two social dimensions of which can help explain cultural diversity and the dialectical relationship between culture and attitudes (cultural worldviews).

These two dimensions are made up of grid and group, each having two possible outcomes to which build a cultural worldview profile for individuals. Grid is understood as the relationship to power, where individuals can be either egalitarian, seeking to “(…) reduce inequalities between people” (Oltedal and Rundmo, 2007: 122), or hierarchist, upholding a belief that “(…) all roles and tasks are assigned, the division of labor is clearly defined and ‘everyone remains in the same post’” (Cerroni and Simonella, 2014: 121). Group, on the other hand, represents “(…) the outside boundary that people have erected between themselves and the outside world” (Douglas and Wildavsky, 1982: 225). Here, individuals can be considered as either individualists, emphasizing individual freedom and autonomy in various aspects of society, or communitarians, affiliating and contributing to groups as a form of social support and protection from vulnerability. 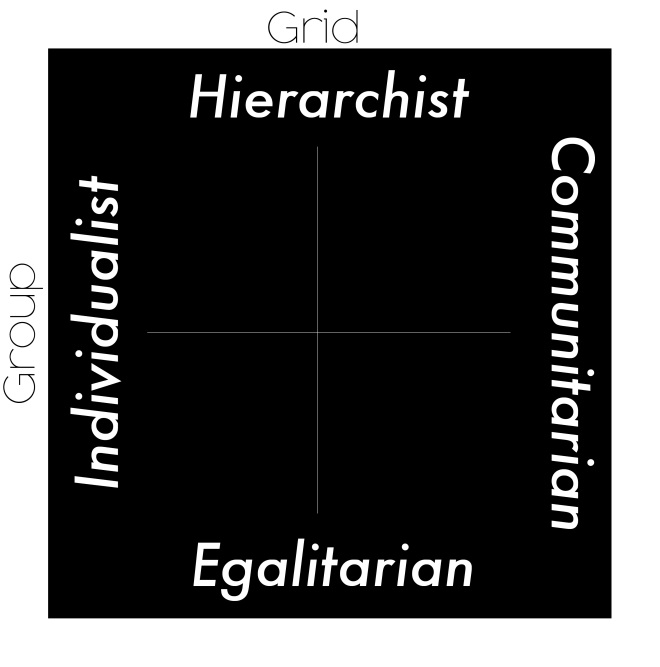 All told, the theory claims that individuals can have one of four cultural worldview profiles:

All theories experience limitations. Beck (2009), for instance, asserts “(…) it is difficult to square the claims of cultural theory to transhistorical, context-independent validity with its interest in precision, relativity and cultural construction” (Beck, 2009: 239), accusing that its foundational pillars are most likely based on an ethnocentric narrative. More importantly, Marris et al. (1998) have questioned the analytical purchase of cultural theory, claiming that correlations between the four cultural biases and risk perception are generally weak, and that placing individuals in these categories funnels analysis into generalisations that can “(…) only be used to measure worldviews at a collective level” (Marris et al., 1998: 644).

Douglas, M. and Wildavsky, A. B. (1982) Risk and Culture: An essay on the selection of technical and environmental dangers, Berkeley: University of California Press.