After collecting over 300 reports throughout the last year, curating our mapping platform and analyzing collected data, OHRFMT releases its final report. 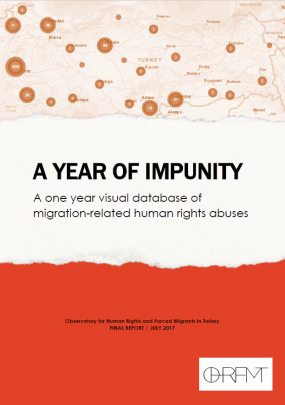 The following report (download here), entitled A year of impunity: A one year visual database of migration-related human rights abuses, was prepared by the Observatory for Human Rights and Forced Migrants in Turkey (OHRFMT) and released in July 2017.

The main findings of this report are as follows:

As a result of these findings, the following recommendations have been made.

OHRFMT believes that the vast majority of those mentioned in collected reports should have access to a formal asylum process to make a claim for refugee status. As a result, you will find that the Observatory often refers to forced migrants within Turkey as ‘refugees’ albeit these individuals not having formal Convention Refugee status. This is intentional, not a mistake.